Two years ago, we took a break from our African visits to go to Alaska for a couple of weeks. Of course we did most of the usual stuff (except cruising on a large ship). We started in Anchorage – lovely city, good restaurants (try Simon and Seafort’s – the halibut cheeks were wonderful), a very well done Anchorage Museum (land, people, art and history of Alaska) , and interesting activity around a busy Lake Hood seaplane base. Then we headed to Denali National Park on the train, a three day journey up, into, and back. This was well worth the time, and something one just has to do. The scenery was awesome, we did see some wildlife (a grizzly, some Dahl sheep, some caribou and a  moose in town). But we did not see the peak; apparently 70% of the visitors do not because of cloudy skies. http://www.simonandseaforts.com. http://www.anchoragemuseum.org.

We then drove down the Kenai Peninsula to Homer, and spent three days there. Neat little town with great views of Cook Inlet and the mountains on the afar Katmai Peninsula. Lots of local restaurants and shops, and the famous Homer Spit with its’ equally famous Salty Dawg Saloon. We fished for halibut – caught our limit and later thoroughly enjoyed the eating – a good time, but it was like pulling a dead weight up 100′!

Then off to Sitka and an eight day cruise in the Inner Passage, ending in Ketchikan. Wonderful experience to spend that time on a 40 passenger catamaran (with 17 crew) cruising the waters of the Inner Passage.

We had several really neat adventures that I want to tell you about in some detail.

The first is the cruise itself. A small boat cruise like this is very special. We made 36 other friends, and loved the crew from the captain to the chef to the pastry chef to the naturalist to the deck hands. The food was fabulous. The cabins were small but comfortable – all we did there was sleep. The sights were unbelievable. The activities and lectures were both educational and enjoyable. This cruise is an intimate exposure to some of our most beautiful geographic sights, fascinating cultures and wildlife. http://www.alaskandream.com. Some highlights:

Hop in a jet boat at the dock in Wrangell, and head south along the shores of Wrangell Island and the mainland for 35 miles on an exhilarating ride to a special place. After a 30-35 minute ride (yes, that fast) one reaches the entry point to Anan. This is an area regulated by the US Forest Service, and access is limited to 60 people per day. Take a moderately difficult walk along a narrow boardwalk with 250 steps (total elevation gain is 150′) accompanied by an armed ranger – there are bears here! Eventually we reach an elevated observation deck, complete with a photographic blind down below, built over a cascading Anan Creek. This was an ancient Tlingit native fishing site. Between June and August the salmon and straining to swim up the creek, and there are bears (brown and black)and eagles galore trying to get their share! And you get very close and can take great images. If you are ever going to be in Wrangell you just have to experience this 5-6 hour excursion. http://www.wrangell.com. 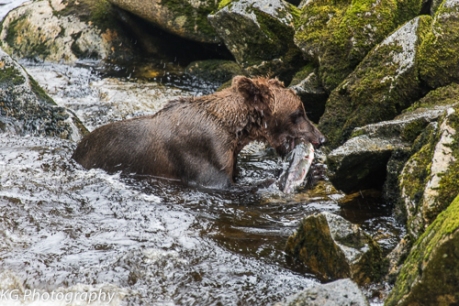 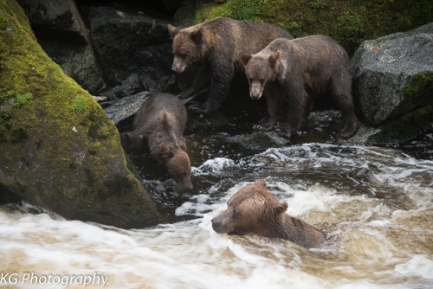 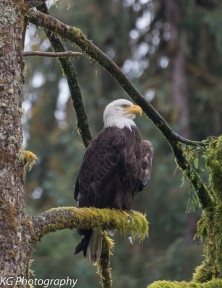 Another wonderful adventure is a small plane trip to the Katmai Peninsula to see  bears and  glaciers. Katmai National Park and Preserve protects an active volcano landscape and 9000 years of human history, and is an important habitat for salmon and thousands of brown bears. We took a five passenger (plus pilot/guide) plane on a 45′ flight across Cook Inlet from Homer on Homer Air. The pilot landed us on the beach which was quite exciting but uneventful. We piled out and joined a second group and proceeded to check out the scene for brown bears. We soon found them – in the adjacent meadow, cavorting in the surf, digging in the sandy beach for clams and so on. We had some excitement. Two juveniles came hurtling down the beach towards the group and broke off at the last second! And we waded across a small stream to get closer to some other bears; the return trip was exciting as the tide had raised the water to hip level. While we had waders on, we got wet feet! This is an adventure well worth taking, and runs about $600 for a 5-6 hour day. Our pilot eventually reduced air pressure in the tire, we took off and he showed us closeup glaciers complete with mountain goats. http://www.homerair.com.

By the way, do you know the difference between brown bears and grizzlies??? The answer is basically nothing other than brown bears live by the water and eat fish, and grizzlies live in the mountains and eat meat. 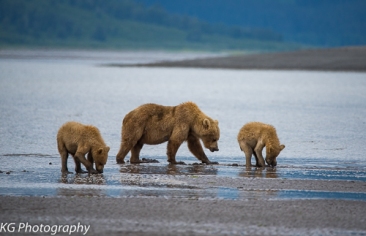 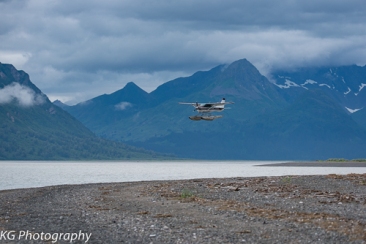 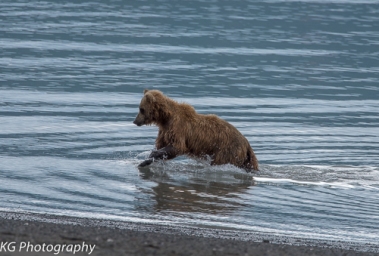 While there are probably many wildlife rescue facilities in Alaska, we visited two and can highly recommend both. The Alaskan Wildlife Conservation Center (in Girdwood (45 minutes east of Anchorage) is a 200 acre site with a 1.5 mile loop which can be driven. Rescued wildlife is arranged in specific habitats, and can be fairly closely approached for pictures and general observation. The wildlife includes bears, bison, elk, deer, caribou, moose, fox, wolves, lynx, owls, eagles and more. http://www.alaskawildlife.org. The Alaska Raptor Center in Sitka, situated on 17 wooded acres adjacent to the Tongass National Forest, rehabilitates about 100-200 bird annually. They have about 25 Raptors-in-Residence including owls, eagles, hawks, falcons and kestrels; these raptors cannot be released because of permanent disabilities. One can easily do a walking tour in an hour or so, and get quite close to the wildlife. http://www.alaskaraptor.org. 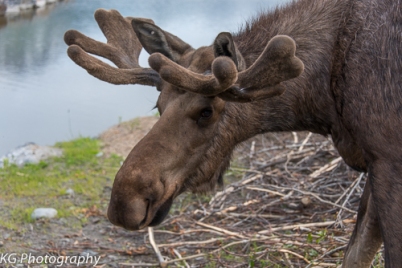 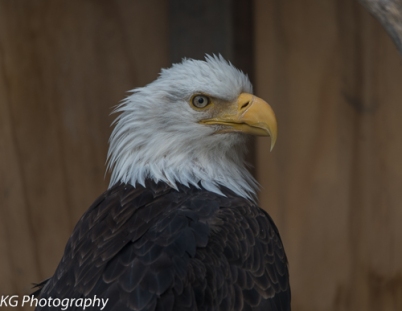 My last “adventure” is less wildlife focused, but fun. In Homer, the Kachemak Bay ferry called the Danny J (29 passengers) does several trips daily. One is an afternoon visit to a bird sanctuary on Gull Island, which has 9 species of birds. Another is a dinner cruise which departs at 5 PM and sails across the bay to Halibut Cove (12 miles)and dinner at The Saltry. Halibut Cove is an isolated small community of some 75 residents with no road access. It’s population peaked in 1911 at about 1000 people, when it was a center for old herring salteries. Today it is a little jewel tucked away in Kachemak Bay State Park, and is an enclave of artists, craftsmen and commercial fishermen. There are 12 blocks of boardwalk skirting the water’s edge, with several neat little shops selling hand crafts. Sea otters, harbor seals, porpoise and eagles abound.

The Saltry is a very pleasant little restaurant situated up a steep walkway from the dock, and it has both indoor and outdoor seating. The salt air is infectious and the views of water, forests and mountains from the outdoor deck are spectacular. The fare is of course heavily focused on the sea, with oysters, mussels, octopus, scallops, halibut, wild salmon and black cod featured on the menu. The smoked black cod was indescribable. http://www.thesaltry.com. 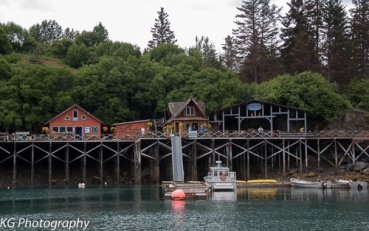 Just a few of our most pleasant experiences in Alaska. You must see for yourself of course.